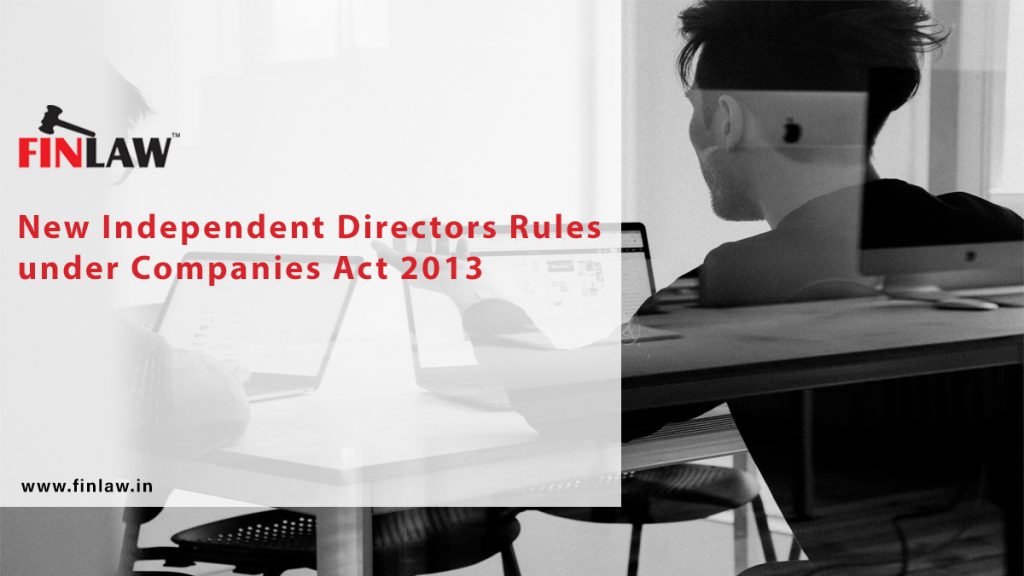 ? Exemption for Appointment from Independent Director:

Unlisted companies which are in a joint venture, wholly owned subsidiary or a dormant company as defined under section 455 of the Act and fulfilling the above requirements are not required to appoint Independent Directors.

? Role of an Independent Director

Independent Director Acts as a guide, coach and mentor to the company.  The role includes improving corporate credibility and governance standards by working as a watchdog and help in managing risk. Independent directors are responsible for ensuring better governance by actively involving in various committees set up by company.

? Here are some important pointers under the New Independent Directors rules:

Proficiency means the proficiency of the independent director as ascertained from online proficiency self-assessment test conducted by the institute notified under sub-section (1) of Section 150 of Companies Act, 2013 i.e. IICA.

-Online application for inclusion of name in databank:

Any person who is willing to be appointed (or is already an) Independent Director, must apply online to the IICA for inclusion of his/her name in the date bank of Independent Directors and ensure compliances as required and pass an online proficiency self- assessment test.

– Period of Name Inclusion in the Data Bank:

The online proficiency self-assessment test would be conducted by IICA and the passing marks for such test are Sixty percent (60%).

This Online proficiency Self-assessment test is intended to cover company’s law, securities law, basic accountancy and such other areas relevant to the functioning of an individual acting as an independent director.

-Time Period for Clearing the Test:

This online proficiency self-assessment test is required to be cleared by the individual, conducted by the IICA, within a period of one year from the date of inclusion of his name in the data bank, failing which, his name shall remove from the data bank of the IICA.

The MCA has granted exemption from the requirement of clearing the said online proficiency self-assessment test in case of individuals who has served for a period of not less than ten years, as on the date of inclusion of his name in the data bank, as a director or Key Managerial Personnel (KMP) in a listed company or a Unlisted public company having paid-up share capital of Rupees Ten Crores or more.

The Information available in the data bank shall be provided only to companies required to appoint independent directors after paying reasonable fee to the IICA.

As Interests of the minority shareholders are expected to be protect by the Independent Directors, they act an s a Watch Dog for the purpose of ensuring corporate governance.

One can expect to have individuals who in their capacity to act as independent director to have diverse skill to serve as Independent Directors of Companies and to infuse some rationale decision making in the conduct of the activities of the Board of Director essentially to uphold highest standards of Corporate Governance.

The Companies can also access the databank after registration for researching and appointing directors to their companies.

Three basic steps to be followed are:

Individuals who wish to empanel with the Independent Director’s Databanks has to start the empanelment process by accessing the website of MCA. Existing directors can access through their DIN, other professionals can access through PAN or Passport. Foreign nationals without DIN/PAN can also visit MCA21 and empanel with the databank through their Passport Number and by providing basic contract information such as email, mobile number etc.

On verification by MCA21 portal, the user will be automatically redirected to the independent Director’s Databank. The user can log in to the Databank by using the credentials send to the registered email.

The MCA21 data will be auto-populate in the Profile page of the databank. The user had to fill the details of personal, professional, and educational. Also need to mention the KMP positions held by the independent Director.

The Director can opt to display the personal details on the databank.