Indian Govt. to Introduce Bill soon, Cryptocurrency Ban to be made Explicit. 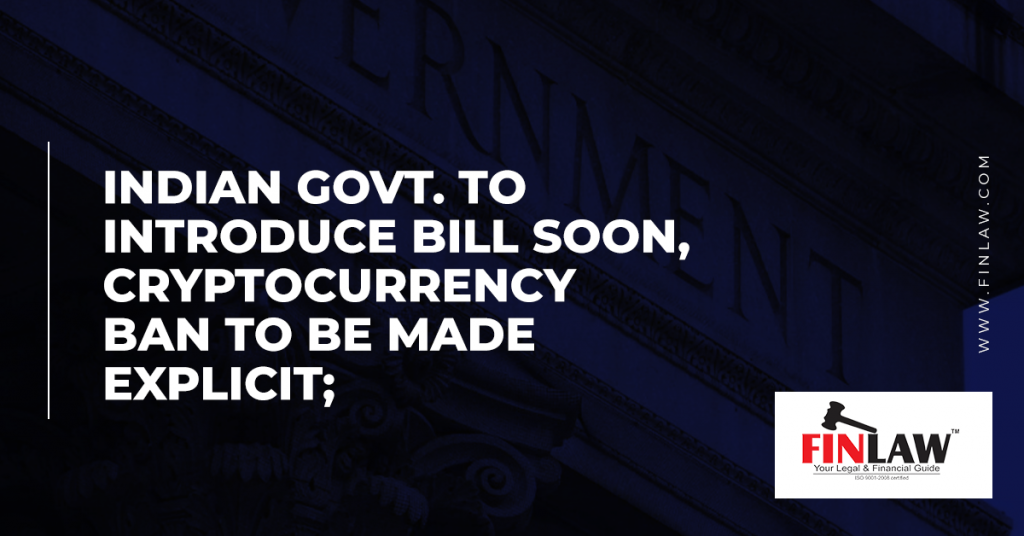 The government will soon introduce a Bill in Parliament that will explicitly ban private cryptocurrencies such as bitcoin, as it concurs with the central bank that enabling private parties to toy with currencies can potentially threaten the stability of the financial sector.

But the Cryptocurrency and Regulation of Official Digital Currency Bill, 2021, will facilitate the launch of any official digital currency and bolster an ecosystem around it. The Reserve Bank of India (RBI) is close to rolling out such a currency

While senior government authorities and RBI have consistently made their resistance to private cryptographic forms of money understood, the Bill will be gotten to give strong legitimate support to the boycott and is required to eliminate any ambiguities around it, a source told FE.

“Presentation of monetary forms is a sovereign capacity, and it should stay that way,” the source added. Besides, with innovation changing the manner in which individuals attempt exchanges, it’s critical to have a system for different methods of installments, he added.

The price of bitcoin surged last month after electric car manufacturer Tesla announced its purchases of the cryptocurrency worth $1.5 billion. However, it fell about 10% a few days later after Elon Musk observed the bitcoin price seems high. Bitcoins have seen a spike in value since October 2020, from about $10,000 apiece to close to $50,000 now, beating returns witnessed in most asset classes.

The Supreme Court last year set aside a 2018 RBI circular that had barred financial sector entities from offering services to any individual or business dealing in virtual currencies. This reflects the concern that extant laws are inadequate to deal with the proliferation of private cryptocurrencies. A solid legal backing, therefore, could go a long way in removing any ambivalence over the issue.

Cryptocurrencies typically operate independently of a central bank. These are essentially digital currencies in which encryption techniques are used to regulate the generation of their units and verify the transfer of funds.

In 2019, an inter-ministerial committee under then economic affairs secretary Subhash Garg had suggested that private cryptocurrencies like bitcoin be banned, and any activities related to virtual currencies be criminalized.

Even the central bank had through public notices in December 2013, February, and December 2017, warned holders and traders of virtual currencies about risks associated with dealing with such currencies.

The specialists’ frustrate with bitcoin originate from the way that it doesn’t get its incentive from any fundamental resources or profit. Since its worth relies simply upon what a financial backer will pay for it, it very well may be effortlessly influenced with speculative offers. In addition, such monetary standards regularly keep the proprietors’ character mysterious, making it hard to follow its stream. This can cause security chances and the monetary standards can be utilized to channel Black Money