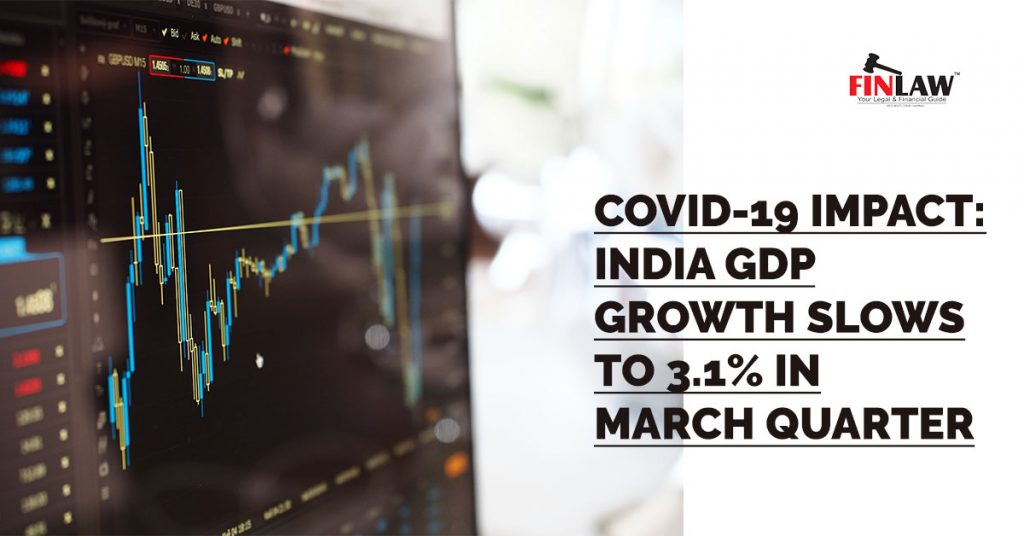 Gross domestic product grew by a slower pace of 3.1% in the fourth quarter of 2019-20, showed data released by the Central Statistics Office on Friday. This, as the coronavirus further weakened consumer demand and private investment in the March quarter. The median forecast from a Reuter’s poll of economists had put annual economic growth at 2.1% in the March quarter.

During the quarter under review, only one week of nationwide lockdown was observed. Growth was 4.2% in the fiscal year through March 2020, the Statistics Ministry said, as compared to 6.1% in FY19.

The Reserve Bank had pegged the GDP growth for 2019-20 at 5% as projected by the NSO in its first and second advance estimates released earlier this year in January and February respectively.

“Q4 GDP print came in higher than most economists’ estimates at 3.1%. On the output front, agri and mining sectors seem to have held forts. On the expenditure front, government spending seems to have saved the day. Private consumption, Gross fixed capital formation and net exports have been disappointing There have been material downward revisions in Previous quarters’ GDP prints, resulting in GDP growth for FY20 coming in at 4.2%.

“April core sector data came in at -38.1%, the worst print ever. Most of the negativity has already been priced in and markets are braced for a shocker of a GDP print in Q1 FY21 as well. Going forward, markets are more likely to focus on leading and high frequency indicators to get a sense of the pace of recovery once restrictions on movement are eased. They would be closely tracked alongside the Corona cases curve,” said Abhishek Goenka, Founder & CEO, IFA Global.

The full impact of the lockdown on manufacturing and services will become more visible in the June quarter, with Goldman Sachs predicting a 45% contraction from a year ago.

Economists expect the fiscal year that began in April will see the worst economic contraction in four decades.

“Economic activity will face ongoing disruption over the next year as the country transitions to a post-COVID-19 world,” the rating agency S&P said on Thursday, cutting its 2020/21 forecast to a 5% contraction.

The output of eight core infrastructure industries shrank by a record 38.1% in April due to the coronavirus-induced lockdown, according to the official data.